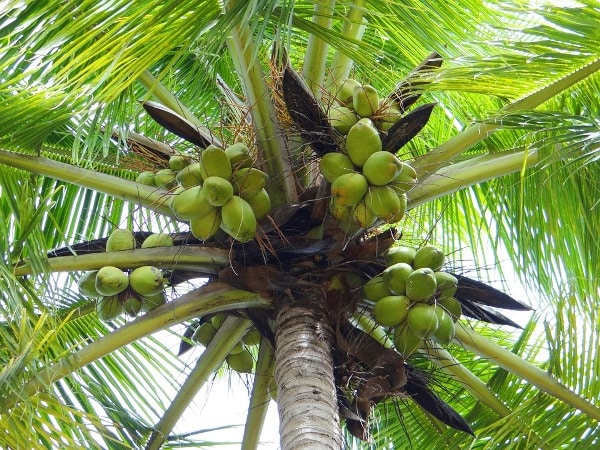 The coconut [Cocos nucifera (C. nucifera) L.]നാളികേരം,തേങ്ങ is an important fruit tree in the world, providing food for millions of people, especially in the tropical and subtropical regions and with its many uses it is often called the “tree of life”. At any one time a coconut palm has 12 different crops of nuts on it, from opening flower to ripe nut.

India is the third largest coconut producing country, after Indonesia and the Philippines, having an area of about 1.78 million hectares under the crop. Annual production is about 562 million nuts with an average of 5 295 nuts hectare.In India, the four south Indian states namely Kerala, Tamil Nadu, Karnataka and Andhra Pradesh account for around 90% of the coconut production in the country; the overall state wise coconut production is depicted

Is coconut a nut or a fruit?

Botanically a coconut is a fibrous one-seeded drupe also known as a dry drupe. However, when using loose definitions, the coconut can be all three: a fruit, a nut, and a seed. Botanists love classification

Is eating raw coconut नारियल Naariyal good for you?

For thousands of years, coconut products have held a respected and valuable place in Indian folk medicine. It is believed to be anti blenorrhagic, anti bronchitis, febrifugal, and antigingivitic. In Ayurvedic medicine, the oil, milk, cream and water of the coconut are all used to treat hair loss, burns and heart problems.

In India, the use of coconut for food, and its applications in the Ayurvedic medicine were documented in Sanskrit (The Sanskrit name for coconut is ” Kalpa – Vriksha “. Now, Vriksha means tree.) 4 000 years ago. Records show that in the United States, coconut oil was one of the major sources of dietary fats, aside from dairy and animal fats, prior to the advent of the American edible oil (soybean and corn) industry in the mid 1940s.