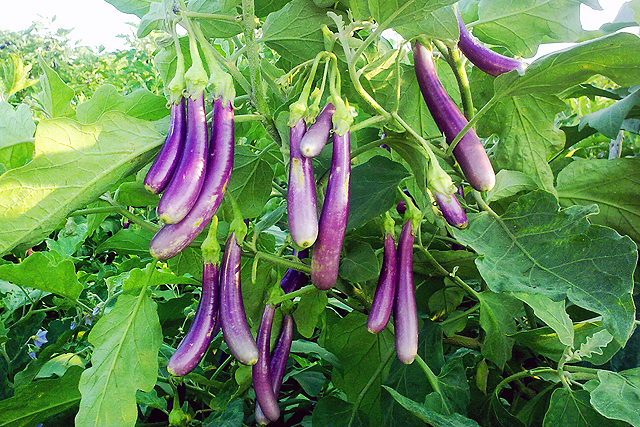 The eggplant, also known as brinjal , garden egg,aubergine and melongene, is usually distinguishable by its signature egg-like shape and vibrant purple color. Eggplant, Solanum melongena L., is a popular vegetable crop grown in the subtropics and tropics. It is called brinjal in India and aubergine in Europe. The name “eggplant” derives from the shape of the fruit of some varieties, which are white and shaped similarly to chicken eggs.

Eggplants are arriving at the market in all shapes, sizes and hues. Some are pear-shaped, fat, shiny and black; others are thin, foot-long and dark purplish. There are bright fuchsia eggplants and eggplants with magenta and white striations. Some are pale violet; some pale green. Some are truly egg-shaped and ivory white. And there are tiny round pumpkin-coloured ones no bigger than an inch in diameter.

The whole world loves brinjal or eggplant ,both for its flavour and for its versatility

Originally cultivated several thousand years ago in South Asia, the eggplant travelled to the Middle East, around the Mediterranean and beyond. Today, the whole world loves eggplant, both for its flavour and for its versatility; an eggplant can appear in many guises, hot or cold, fried, roasted, steamed, grilled, baked, simmered, stuffed or pickled. Or as moussaka, parmigiana, tempura, ratatouille or baba ghanouj. Eat it with pasta, as a soup or in a curry or even in a salad. But by salad, I mean a cooked vegetable salad (although eggplant is technically a fruit), not a bowl of leafy greens. Like potato or beet salad, an eggplant salad gains flavour when allowed to marinate, so the following eggplant salads taste best if they are made a few hours before they are served, or even a day ahead.

Brinjal – Gorgeous, purple-coloured vegetable with a smooth and shiny surface – in different cuisines

This vegetable is quite diverse and more versatile, both in the garden and in the kitchen. Eggplant has chemicals that can cause digestive upset if eaten raw, so is usually cooked. It can be grilled, stuffed, roasted, served in soups and stews and on kebabs, and used in curries and stir-fries. 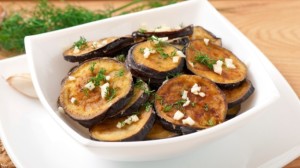 For a Turkish-inspired salad, eggplants need to be mercilessly charred over hot coals, under the broiler or in the flames of a stovetop burner. Cook the eggplants until they soften and collapse, their skins completely blackened. Once cooled, scrape away the skins; the interior flesh will have a pleasantly smoky aspect. —

Chop-the-flesh to a rough puree and season with garlic, lemon juice and crumbled dried mint (preferred by – Turkish cooks), then whisk in olive oil and yogurt. If you can find pomegranate molasses, sold in Middle Eastern groceries, add a drizzle for a nuanced sour flavour. Otherwise add another squeeze of lemon or lime. Served with warm pita or other flatbread, this salad resembles a dip or spread. 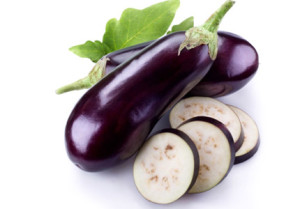 For an easy Chinese-inflected salad, use a different technique: Steam the eggplant to softness, then peel it (or if you prefer, bake the eggplant until soft). Shred the cooled eggplant flesh with two forks and dress it with a mixture of sesame oil and rice vinegar fortified with garlic, ginger and hot pepper. This simple combination-of flavours creates an intoxicating aroma. Just before serving, shower the salad with slivered scallions and cilantro sprigs, which makes the dish bright and refreshing. Usually, medium-size or small eggplants are the tastiest. The most important thing, though, is to start with eggplants that are firm, smooth and glossy.

Eggplant is nutritious, being low in calories, fat, sodium and  is a non starchy fruit that is cooked as a vegetable. It contains a large volume of water. It is good for balancing diets that are heavy in protein and starches.It is high in fibre and provides additional nutrients such as potassium, magnesium,folic acid, vitamin B6 and A.
Commonly known as the eggplant, brinjal is one of the most easily available and affordable vegetables