Aranmula, a small village in a,the Pathanamthitta District of Kerala is well known for its ancient temple dedicated to Parthasaradhi (Lord Krishna).  Here among its many attractions like the holy river Pamba,the snake boat race during Onam Season and the fine metallurgical art of making metal mirror of Aranmula-Mirror(Aranmula Kannadi)

It has the supreme and sole distinction of making the wonderful metal mirror called “Aranmula Mirror”/Aranmula Kannadi.  As per local believes the hand made Aranmula mirror keeping in house bringing prosperity.  So is a worthy gift for occasion like wedding,housewarming and all other auspicious occasions.

According to Kerala tradition,the mirror forms a part of the “Ashta Mangalya Set” which is an auspicious item that is usually used in occasions like marriage. 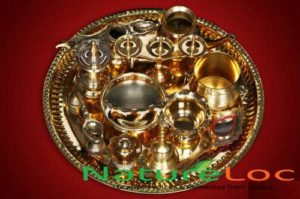 The origin of Aranmula Kannadi linked with the Aranmula Parthasaradhi Temple.  The legends says that,some centuries ago eight families of experts in temple arts and crafts were brought to Aranmula from Thirunelveli a in remote village in Tamil Nadu State.  They are given the task of undertaking work in Parthasarthy temple.  While working with bronze to make a crown for the presiding deity of the temple “Lord ParthaSarathy”. They accidentally stumbled upon a unique reflective property of one alloy comprising copper and Tin.  The craftsmen later tried different compositions,which eventually lead to the standards of making the metal mirror,which is still kept as guarded secret.