Coconut oil – Virgin coconut oil (VCO) is the newest,high-value coconut product very much sought after for its human,nutraceutical benefits and as a functional food.  World demand for virgin coconut-oil is rapidly increasing. Virgin coconut – oil production,which at present is mostly done at household,micro or village scale levels,is rising rapidly and has excellent potential for improving coconut farm incomes  by five to eight fold over traditional copra production or sale of fresh nuts.

The pristine fruit grains from mechanised modernity it is losing out a traditional handmade form of extraction,the goodness of virgin coconut-oil or velichenna kachiyathu.  This was once made in all homes in Kerala in Urulis or bell metal vessels, on big burners. 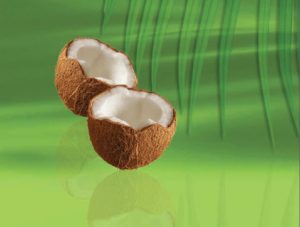 In its purest form, coconut- oil is clear (like clean water), with a distinct coconut flavour and aroma and no rancid smell, even without undergoing chemical refining and deodorization processes. It was only in the late 1990s that the clear version of coconut- oil (otherwise known as virgin coconut oil) became known in the market. The coconut-oil which has been traditionally produced and traded since the later part of the 19th century is yellow in colour.

At present, there are two types of edible coconutoil available in the commercial market: refined,
bleached and deodorised (RBD) coconutoil and virgin coconutoil (VCO).

RBD oil  is derived from copra, the dried coconut kernel that is processed either by sun drying, smoke drying or hot air drying. The crude coconut oil is subjected to chemical refining,bleaching and deodorisation processes to make it fit for human consumption.

VCO is the purest form of coconut oil. It is clear/colourless, contains natural Vitamin E and has not undergone atmospheric and hydrolytic oxidation as attested by its low peroxide value and low free fatty acid content. It has a mild to intense fresh coconut aroma. The intensity of the scent depends on the process used in its production. Previous: Is your kid/child a breakfast skipper ? An Easy,simple and healthy breakfasts
Next: Hibiscus Leaf and Hibiscus Flower -Recipes