Ghee – Promotes longevity and protects the body from various diseases

Ghee is widely considered as the Indian name for clarified butterfat, usually prepared from cow’s milk,buffalo milk or mixed milk. In the Middle East, ghee is commonly made from goat, sheep or camel milk and it is known as maslee or by some variant of the Arabic term samn. In Iran, it is called roghan. 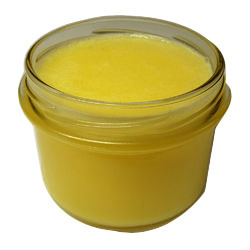 Ghee, also known as clarified butter or anhydrous milk fat, is prepared by heating butter or cream to just over 100°C to remove water content by boiling and evaporation, then filtering out the precipitated milk solids. This is known as ghrta (commonly spelled ghrita) in Sanskrit. Ayurveda has traditionally considered ghee to be the healthiest source of edible fat, with many beneficial properties.

A major portion of ghees utilized for culinary purposes, e.g., as a dressing for various foods and for cooking and frying of different foods. In India, it is considered as a  sacred article  and used also in  religious rites.It is heavily utilized in Ayurveda for numerous medical applications, including the treatment of allergy, skin, and respiratory diseases. Many Ayurvedic preparations are made by cooking herbs into gee. Ghe carries the therapeutic properties of herbs to all the body’s tissues. It is an excellent anupana (vehicle) for transporting herbs to the deeper tissue layers of the body It comprises short,medium and long chain fatty acids,which means it contains both saturated and unsaturated fats.  Ghe,when prepared from cow’s milk,has the highest natural source of CLA (conjugated linoleic acid),  which helps burn the stubborn fat in your body.  Being rich in antioxidants such as vitamin,A,D,E and K helps build up immunity,which is why it is given to newborns who are more susceptible to infections.  Research shown that the consumption of ghee in limited amounts helps in cancer treatments due to the antioxidants in it.  Butyric acid in ghee helps reduce inflammation,particularly in the gastrointestinal tract,aiding in proper digestion,it gives us healthy skin and eyes too,because of its high vitamin content.

You can Taste the difference!Buy NatureLoC Milma Ghee    Buy Now

However,we need to take care that we do not consume ghee in large quantities.  It is better than oil and butter and can replace them whenever possible

Previous: How to use Jackfruit flour | Jackfruit powder Recipes
Next: Which Tawa is best for making Dosa ?