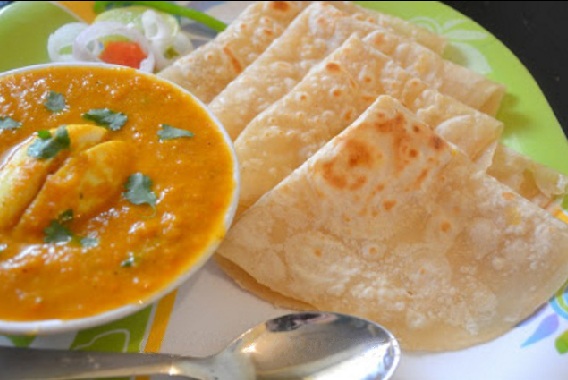 Rumali roti is one of a delightful dish popular among the South Asian countries.  Rumali or Roomali roti is a thin flat bread recipe made of all wheat flour (Atta) and All purpose flour (Maida). Unlike many other dishes like Paratha, Naan and Chapati, these are rolled to form a super thin roti with a circular shape and are folded like a handkerchief. Hence the name Rumali as in Hindi language the word rumali means handkerchief. It is usually served with delicious egg curries, Kebabs and tandoori recipes. Traditional Rumali roti preparations make use of inverted clay pots known as Matka or clay pitcher for cooking. Have a look at the list of ingredients required and the method of preparation of Rumali roti recipe.

Method of preparation of Rumali Roti

Previous: Navara rice or Njavara rice baby food – For low weight babies
Next: Fruit and vegetable drink and excellent food to bring down the body temperature