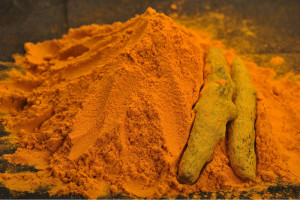 Turmeric ,the Golden Spice with a lot of medicinal properties has been held sacred from time immemorial. In India ,many other country’s and some far-eastern Asian nations, turmeric forms a part of Hindu religious customs and practices. It is associated with the worship of Hindu deities : `Kaali’ (Mother Goddess) and `Naaga’ (Serpent deity). In Kerala, dried turmeric powder, rice powder and a few other plant derived powders are used in colouring materials in making and decorating the huge `Kalams’ of various deities connected with `Sakthi’ worship (Mother Goddess) which is locally known as `Kalamezhuthupattu,’ a folklore tradition existing even today.

Turmeric, the auspicious spice implies a symbol of purity, fertility and prosperity among the Hindus. Turmeric powder along with sandal powder is used in preparation of `Kalabha,’ which is used to be poured on the presiding deities in temples. The dried turmeric roots in betel leaves are given to the women during the ceremonies as they are considered as fertile ,pure and also  bring good luck. Married Hindu women apply `Kumkum’ on their forehead longitudinally along the hair partition path to indicate the marital status or sometimes apply turmeric paste on either side of the cheek.Turmeric the yellow spice has been put to use as a foodstuff and in many dishes ,cosmetic, and medicine-it has good medicinal properties. It lends curry with its distinctive yellow color and flavor,taste. It is used as a coloring agent in cheese, butter, and other foods and dishes. Turmeric is also used in manufactured food products such as canned beverages, dairy products, baked products, ice cream, yellow cakes,  orange juice. biscuits, popcorn, sweets, cake,icings, cereals, sauces,paztas and gelatins Because ofits brilliant yellow color, turmeric is also known as `Indian saffron.’

Three major curcuminoids , curcumin, demethoxy- curcumin and bis demethoxy curcumin are the substances which imparts yellow color to turmeric. Curcuminoids imparts anti oxidative, anti diabetic and anti inflammatory effects and have been used as a chemo preventive agent for cancers of colon, breast cancer, prostate cancer, esophagus, lung and oral cancer etc….inhibition of arthrosclerosis and inhibition of viral and bacterial growth. Turmeric, the traditional Indian medicine, plays an important  role in the improvement of behavioral symptoms in persons who are suffering from disease like Alzheimer’s . According to Sanskrit medical treatises, Ayurveda and Unani systems, turmeric and turmeric powder  have a long history of its  medicinal use in South Asia. Susruta’s Ayurvedic Compendium, dating back to 250 BC, recommends an ointment containing turmeric or turmeric powder to relieve the effects of poisoning in the  food. In Ayurvedic medicines, turmeric is a well documented treatment for various respiratory conditions (asthma, bronchial hyperactivity, and allergy), as well as for liver disorders, anorexia, rheumatism, diabetic wounds, running nose, cough and many other kinds of illness. 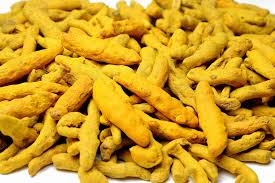 Turmeric, in spite of being an indispensable culinary ingredient that imparts musky flavour and yellow colour to curries and foodstuffs is also an abundant source of medicinal value which can ward off many illnesses that encroaches our life. Thus this yellow herb ensures us a golden healthy and charming life with strong immune system.

Previous: Onam Pookkalam – Traditional way of making Atha pookalam
Next: Do you want to reduce your blood pressure??? Here it is-cocoa