Payasam – Occupies pride of place at all feasts Onam ,Vishu

Payasam, liquid dishes sweetened with either sugar or jaggery

Payasam, liquid dishes sweetened with either sugar or jaggery, occupy pride of place at all feasts. The sweetening agent is either sugar or jaggery. Sugar based payasam, as we know it today, cannot be older than the beginning of the nineteenth century when a modern industry producing white crystalline sugar was established in India. 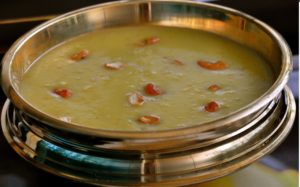 However, jaggery has always been here. The English word `jaggery’ is derived from the Portuguese corruption `xagara’, `jagara’ and `jagra’ of the Malayalam word `chakkara’. This word, in turn, comes from the Sanskrit `sharkkara’.

Currently, both the Malayalam and Sanskrit words have distinctively different meanings in Kerala. Chakkara commonly refers to palm jaggery and sharkkara to sugar cane jaggery. The first is rarely used in sweets. However, it is a sweetening agent black coffee and its smoky flavour does enhance the taste

Paayasam has always been used as ritual offerings.While milk and sugar-based paayasam are offered at Vaishnavite temples, in Shaivite and Devi temples jaggery paayasam are the rule. In fact, some temples are famous for the quality of the payasam which is prepared ‘prasadam or a ritual offering in the temple kitchens. Examples are the milk-based pal paayasam at the Ambalaapuzha Krishna temple and the jaggery-based ney paayasam at the Chottanikara Devi temple. While payasam comes from the Namputhiri-Nair culinary tradition.

How to make delicious Ada Pradhaman?

Ada Pradhaman is a traditional classic dessert recipe from Kerala. It is one of the most popular paayasam varieties prepared during the festive seasons like Onam. 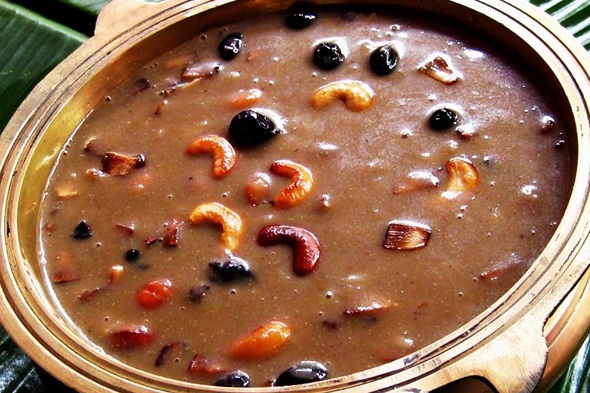 Previous: Are you aware of the adulterations in milk? How can you find out whether the milk is pure?
Next: Onam Festival-What is the meaning of Onam? Story of Onam festival