Bumblebees  bumble bees ,member of bee genus,family Apidae. Bumblebees are social insects which form colonies with single queen.Wild bumble bees are born with the ability to remove pollen from nectar less flowers using high frequency vibrations.Bumblebees are large, hairy social insects with a lazy buzz and clumsy, bumbling flight. Many of them are black and yellow, and along with ladybirds and butterflies are perhaps the only insects that almost everyone likes 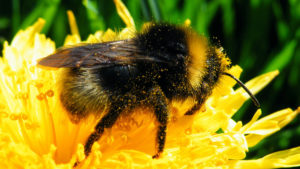 How to identify Bumblebees bumble bees?

Bumble bees (bumblebees) are large robust bees with black and yellow coloration.  It has a black or yellow hairy abdomen which is a character from a carpenter bee,hairless abdomen.

Bumblebees are large, hairy social insects with a lazy buzz and clumsy, bumbling flight. Many of them are black and yellow, and along with ladybirds and butterflies are perhaps the only insects that almost everyone likes

Bumblebees (bumble bees)  have been found  to grab the flower and then vibrate their muscles to shake loose the pollen.  It is known as buzz pollination.The findings showed that initially bumblebeen tend to vibrate on the flower petals,but after two to three visits they focus their efforts exclusively on the part of the flower where pollen is produced

The word “bumble bee” is a compound of “bumble” + “bee” — “bumble” meaning to hum, buzz, drone, or move ineptly or flounderingly. The generic name Bombus, assigned by Pierre André Latreille in 1802, is derived from the Latin word for a buzzing or humming sound.(wike)

Bumblebees are varied in appearance, but are generally plump and densely furry. Compared to honeybees they are larger and stouter-bodied. Many species have broad bands of colour, the patterns helping to distinguish different species.

Whereas honeybees have short tongues and therefore mainly pollinate open flowers, some bumblebee species have long tongues and collect nectar from flowers that are closed into a tube.
Compared to a honeybee, a bumblebee has a broader body and a more rounded tip to the abdomen. Bumblebees have fewer stripes (or none), and usually have part of the body covered in black fur, while honeybees have many stripes including several grey stripes on the abdomen.

Previous: Diet tips to stay healthy during coronavirus scare
Next: 10 Ways Turmeric Can Be Used In Your Beauty Routine