Millets are a group of highly grasses with many small seeds 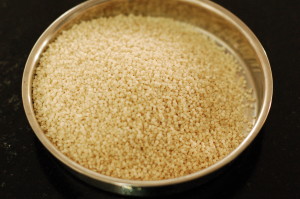 Millets are a group of highly grasses with many small seeds.  the most important millets are pearl millet (Pennisetum glaucum),finger millet (Eleusine coracana),proso millet (Panicum miliaceum),and foxtail millet (Setaria italica) other types of regional importance include fonio (Digitaria exilis) ,Kodo (paspalum scrobiculatum) and teff.Kodo millet [Paspalum scrobiculatum L.] was domesticated in India almost 3,000 years ago. It is found across the old world in humid habitats of the tropics and subtropics. It is a minor grain crop in India and most important in the Deccan plateau.The fiber content of the whole grain is very high. Kodo millet has around 11% protein, and the nutritional value of the protein has been found to be slightly better than that of foxtail millet, but comparable to that of other small millets. As with other food grains, the nutritive value of kodo millet protein can be improved by supplementation with legume protein. 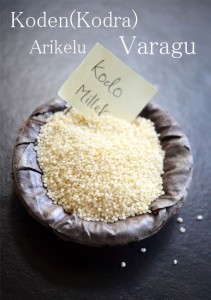 Kodo millet, (Paspalum scrobiculatum L.,) is widely distributed in damp habitats across the tropics and subtropics of the world.It is
indigenous cereal of India and is grown today in Uttar Pradesh in the north and Kerala and Tamilnadu in the south. This cereal is also known as varagu, kodo, haraka and arakalu. It forms the main stay of the dietary nutritional requirements. It has high protein content (11%), low fat (4.2%) and very high fibre content (14.3%).

Kodo millet is very easy to digest, it contains a high amount of lecithin and is excellent for strengthening the nervous system. Kodo
millets are rich in B vitamins, especially niacin, B6 and folic acid, as well as the minerals such as calcium, iron, potassium, magnesium and zinc.Kodo millets contain no gluten and is good for people who are gluten intolerant.Regular consumption of kodo millet is very beneficial for postmenopausal women suffering from signs of cardiovascular disease,like high blood pressure and high cholesterol levels.

Previous: 6 Fennel Seeds Benefits And Fennel Tea Recipe For Indigestion
Next: Banana Flour (Ethakaya Podi): The Best Food For Babies In This Galaxy !!