Mundu- Lungies -Kaily (മുണ്ട്) – Traditionals Dress of Kerala – is a garment worn around the waist in Kerala.  It is closely related to the dhoti, sarong, and lungi. In modern times, two types of mund are prevalent – the single and the double. A single mund is draped once around the waist, while the double is folded in half before draping. A mund is usually starched before use.

Veshtis  have been an integral part of Indian men’s attire since ages. This comfortable garment is still draped today by many men. Pure silk Veshtis with a gold border to be worn on special occasion like rituals, formal functions and during festivals.

Mund is normally woven in cotton and coloured white or cream.The colour is dependent on whether the cotton is bleached.  Unbleached one is called neriyathu.  Kadhar mund is made using handlooms 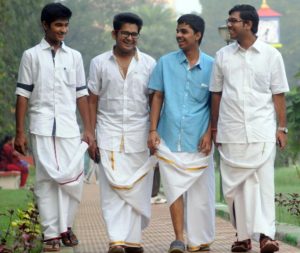 A Kerala dhoti is plain white and known as vella mundu, and it often bears golden embroidery (known as “kasavu” mund), especially at the border; it is worn as formal attire and on ceremonial occasions like weddings, festivals, etc.

Saffron-coloured mundus are known as kaavi mund.  Saffron colour and black colour mund lungies is used during  penance the devotee must wear saffron or black clothes, with a Rudraksha maala around his neck. It means he will stick to the vows and observe sanctity.

In Kerala, the lungi is generally colourful and available in various designs, and it is worn by both men and women. It is also called Kaili mundu. Physical laborers typically use it as a working dress.