Arabica Coffee Beans is a valued species and has been grown and selected for several centuries. It currently represents three-quarters of the world coffee production. Arabica coffee beans originates from Arabia, and thrives in land that is rich in minerals. Its better-known sub-varieties include Moka, Maragogipe,San Ramon, Colomnaris and Bourbon.The Arabica makes a flavoury, full-bodied coffee that is sharp in taste with a rather low caffeine content. As a group, Arabica coffee consists of many cultivars that differ in respect of origin, climatic requirements, tree size,yield pattern, quality of end product, berry size and disease resistance. In fact, some low-quality Arabica species are inferior to the best Coffea robusta varieties. 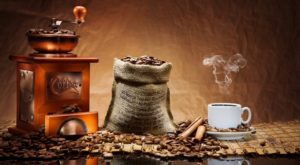 Coffee Varieties – Have a cuppa,which suits your emotional and physical needs

Arabica beans look slightly elongated and have a range of greenish-blue shades.
Coffee (Coffea arabia) is a tropical plant, which belongs to the genus Coffea L. of the family Rubiaceae. Coffea arabica is an evergreen, shrub or small tree, up to 5 m tall when unpruned, glabrous, with small glossy leaves.The coffee fruit is oval, similar in size and shape to a small olive and turns red from green during ripening. The fruit is a fleshy berry, in which two
seeds are imbedded.

Blossoming and fruit setting occurs mainly 2 to 3 times a year. About 6 to 7 months are required to ripen the fruit. The interim period between the flowering and ripening of the fruits varies, being determined by a number of factors (climate, latitude and altitude).

Coffees from cherry to cup – Refresh the taste buds

Dried seeds  “beans” are roasted, grounded and brewed to make one of the two most important beverages. Coffee is widely used as a flavouring, as in ice cream, pastries, candies and liqueurs. It
is a source of caffeine and dried ripe seeds are used as a stimulant, nervine and diuretic, acting on the central nervous system, kidneys, heart and muscles.
Coffee pulp and parchment are used as manures and mulches, and occasionally they are fed to cattle. Coffelite, a type of plastic, is also made from coffee beans. Caffeine has been described as a natural herbicide, selectively inhibiting the germination of the seeds of Amaranthus spinosus.
Caffeine is a widespread additive in over-the-counter diet pills, painkillers and stimulants 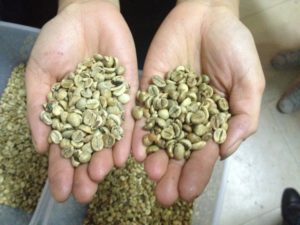