Is Lump Sugar Better Than Sugar

Is Lump Sugar Better Than Sugar?

Lump Sugar  (Palm Sugar) or Kalkandam or White rock sugar candy is known to be a sweetening agent in several Ayurvedic medicines. Its white texture and small rock-like appearance give it a distinctive look. Kalkandam is extracted from a flower of the Palmera tree. It is made from the sap of the palm tree inflorescence by boiling it until it turns into a syrup and then allowed to cool. Then it is made into crystals of different sizes and shapes. 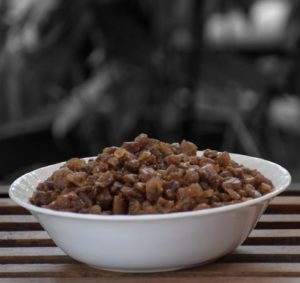 It is scientifically known as Sucrose

Lump Sugar or Rock candy is often dissolved in tea. It is an important part of the tea culture of East Frisia, where a lump of rock sugar is placed at the bottom of the cup. Kalkandam or white sugar candy consumed with tea is also the most common and popular way of drinking tea in Iran, where it is called nabat; the most popular nabat is saffron.

It is a common ingredient in Chinese cooking. In China, it is used to sweeten chrysanthemum tea, as well as Cantonese dessert soups and the liquor baijiu. Many households have rock candy available to marinate meats, add to stir fry, and to prepare food such as yao shan. In less modern times, kalkandam was a luxury only for the wealthy. Palm Sugar candy is also regarded as having medicinal properties, and in some Chinese provinces, it is used as a part of traditional Chinese medicine.

Lump Sugar or Rock candy is a common ingredient in Tamil cuisine, particularly in the Sri Lankan city of Jaffna. 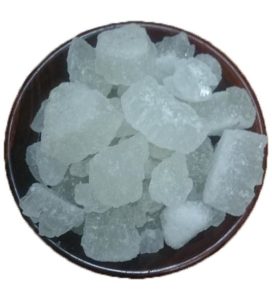 Lump Sugar or Kalkandam being a crystalline sweetener is a natural product without any added preservatives. It is rich in vitamins, minerals, iron, calcium, zinc and potassium. Besides being used as a substitute for refined white and brown sugar, it also helps to quench thirst. Kalkandam contains indositol that is rich in Vitamin B & Vitamin 8 needed for healthy cells and as a substitute for folic acid, thiamine, choline and riboflavin. Kalkandam when mixed with certain ingredients has great nutritional value and can be used to cure many diseases like persistent cold and coughs. It can be used to lower body temperature and also lower the cholesterol content in the body. It is also used as an ingredient in traditional South Asian cuisines like desserts, curries and sauces. Kalkandam in liquid form resembles honey while its granular form looks like white sugar.

Misri (Urdu: مسری‎, Hindi: मिश्री, Bengali: মিছরি) refers to crystallized sugar lumps, and a type of confectionery mineral, which has its origins in India and Persia, also known as rock sugar elsewhere. It is used in India as a type of candy, or used to sweeten milk or tea.

In Hinduism, mishri may be offered to a deity as bhog and distributed as prasad. The god Krishna is said to be fond of makkhan (butter) and misri. In many devotional songs written in Brajbhoomi in praise of Krishna, the words makkhan and misri are often used in combination. In Northern Karnataka people serve mishri along with water to visitors in the Summer season.

Among Indian misri dishes are mishri-mawa (kalakand), mishri-peda, which are more commonly eaten in Northern-Western India, Uttar Pradesh, Delhi, Rajasthan, Gujarat, Punjab, Orissa, North coastal of Andhra Pradesh and many other states and parts of India.

Lump Sugar Palm (Panam Kalkandam) is made from a sweet drink called panam pathaneer. This is extracted from the flower of palmera tree. This is a kind of rock sugar. It is a crystallised sugar. It is also known as Panang Kalkandu, Palm Sugar Candy and rock candy.

Lump sugar is made by tapping the sap from the inflorescence of the palm tree. Boiling it and until it becomes a syrup. Then allow to solid it. And finally made into crystals of different shapes and in different sizes. Here the sugar is dissolving in warm water until the sugar doesn’t dissolve any more. Let it cool.

It is a crystalline sweetener which is rich in nutrient and also low glycemic. Kalkandam  is a completely natural product with no preservatives. It contains minerals, vitamins, calcium, iron & phytonutrients including zinc and potassium. Palm candy can quench thirst with water. This can be considered as a natural substituent for refined sugar. Kalkandam or white sugar candy  is good for health.

Since it is an unrefined sugar, it is known to be rich in vitamins and minerals. As a result, it has become increasingly popular as a substitute to white and brown sugar. Studies have found that it contains minerals like potassium, phosphorus, zinc, iron, manganese and copper; small amounts of phytonutrients such as polyphenols, flavonoids and anthocyanidin; and antioxidants. It is rich in B vitamins, especially inositol (Vit8) which is needed for the formation of healthy cells, as well as thiamine, riboflavin, folic acid and choline.

Previous: Home made pickles or factory made pickles – which type of achar should you buy ?
Next: 5 Cardamom (Elaichi) Home Remedies And Tips For Cough, Sore Throat