Kerala is every food lover’s paradise. Those who have been to God’s Own Country once would relish the culinary experience they had here for ever. Its culinary tradition is known for its generous use of spices and coconut.

Kerala is a coastal Indian state located in down South and It has great influence of geography, demography, history and culture. The State offers varieties of cuisines both vegetarian and nonvegetarian, which are commonly prepared by using the traditional accompaniment viz; Chilies, curry leaves, coconut, mustard seeds, turmeric, tamarind, asafoetida, fish, sea foods, poultry and red meat with rice.

Furthermore, state also has culinary influences from Greek, Roman, Chinese, Portuguese, Arab and Dutch. Some of the most famous and popular cuisines of Kerala are; 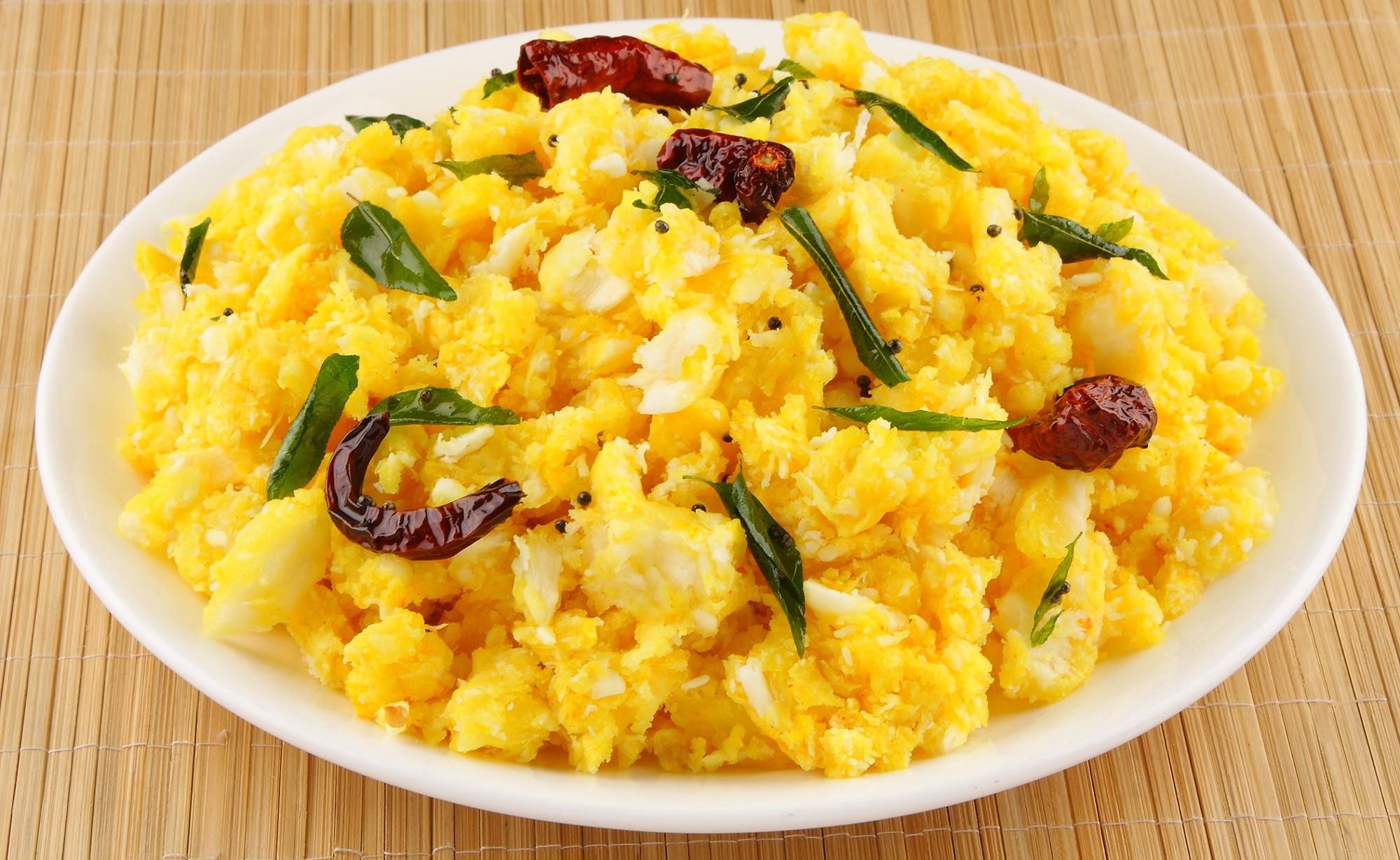 Chakka Puzhukku, Chakka vevichatu or Raw jackfruit dish is one of the main traditional dishes of Kerala. Jackfruit or chakka, the official fruit of Kerala, has evolved as a superfood with all parts of the fruit — carpels, seeds, rags, core — used to make a wide range of products.  Grated coconut is also an important ingredient in this recipe. Green chilly or birds eye chilli is used as a spicy content. Matured and unripe jackfruit are needed for making Chakka puzhkku. The process of taking out the edible component from the jackfruit is known to be a time consuming one. Chakka puzhukku is also served as a side dish for kanji or rice soup for dinner. The combination of rice soup (kanji) and chakka puzhukku is famous among the rural villages of Kerala. Jackfruit Kerala recipes –  Ingredients for making Chakka Puzhukku, Chakka vevichatu or Raw jackfruit dish

Kerala Cuisine -Kappa puzhukku or tapioca recipe with grated coconut mixture is known to be the main tapioca dish popular among the people from Kerala. Tapioca cultivation is common in these parts of the world and is readily available throughout the state. Freshly harvested tapioca roots are peeled off its skin and washed with clean water. It is then sliced to medium sized fine pieces and parboiled with water. Once half cooked, tapioca pieces are taken from the water and are dried in the sun for few days. These dried tapioca pieces are known as Unakku Kappa and are stored for many days in airtight boxes or containers. Kappa Puzhukku prepared with dried tapioca pieces goes well with fish curry and is considered to be one of the main attractions of Kerala cuisine.

Puttu is a humble yet healthy and filling breakfast that takes minimum time and effort to make. 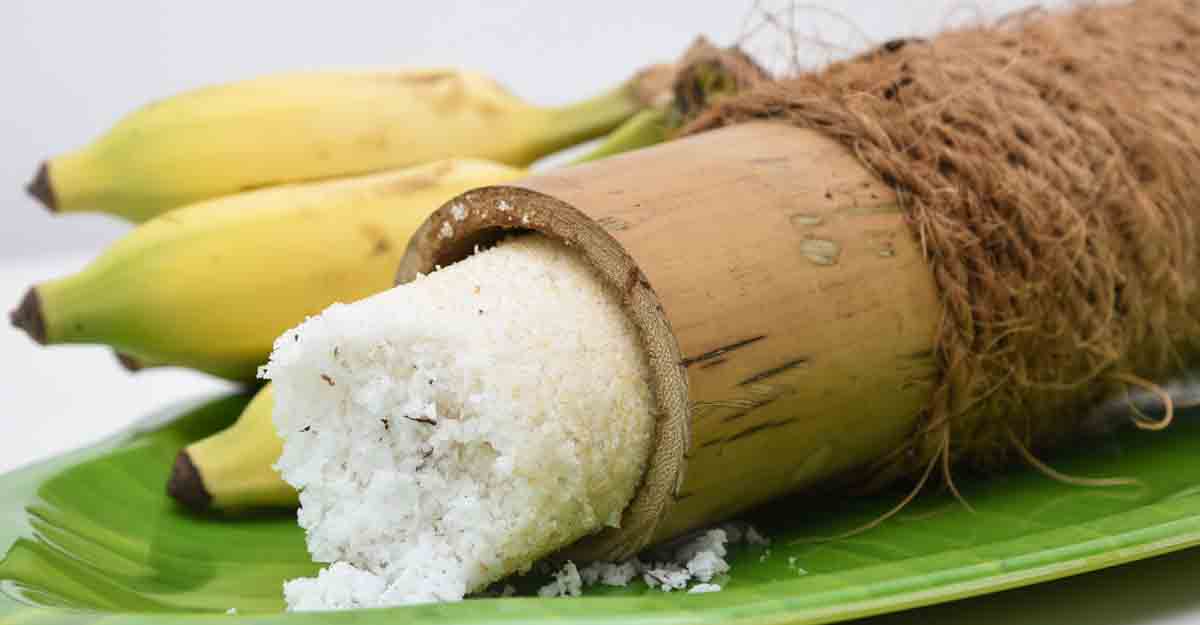 Puttu (Steamed rice cake)  is a famous breakfast dish, popular in Kerala, Tamilnadu and sri lanka which is made by steaming rice flour in puttu maker. Puttu recipe is healthy and delicious breakfast dish.That Keralites love enjoying hot and steaming puttu for breakfast is no big secret. In fact, the evergreen combination of puttu and kadala (Bengal gram) curry has been hailed as one of the most nutritious breakfast combinations. Though Keralites take pride in their favourite puttu, many historians suggest that the dish may have been cooked for the first time in Tamil Nadu. Besides Kerala, puttu is cooked in Tamil Nadu, Pondicherry and the Tamil regions in Sri Lanka as well.

Kerala Cuisine Sadhya is pure vegetarian and common dish to have in any occasion especially in Onam. Sadhya is being served in a specific order on a banana leaf with combination of 24–28 kinds of dishes. If you look up to the traditional connection
of Sadhya is with sadya which means a large feast in Malayalam. 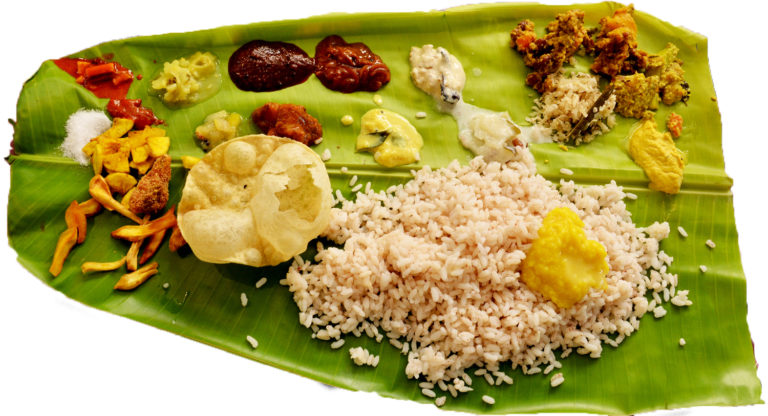 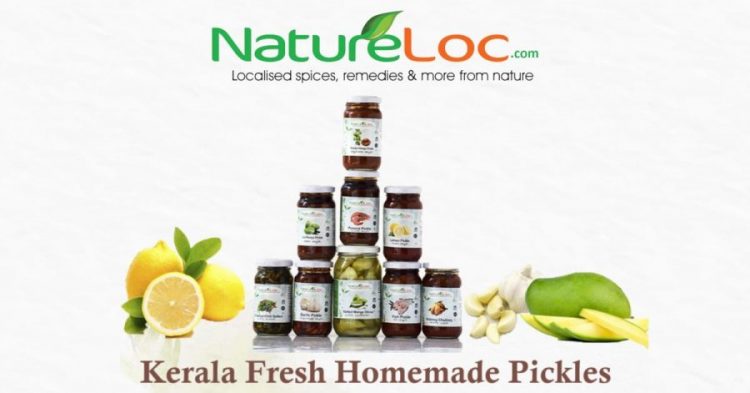