The use of five spice powder certainly gives a life to a dish.  In some part of Kerala cumin,caraway seeds and cardamoms are also added to the five spices

The powder has similarity to the Arab Mix Baharat though this too uses pepper.  Chinese cuisine has a five spice powder which bears no similarity to the one used in Malayalam cuisine.  Fennel is common to the panch phoron used in Bengali cuisine.  Other than that there is no resemblance. 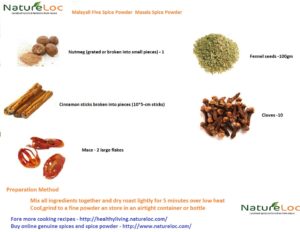