Reflexology, considered effective for many medical and physical conditions, works by improving the circulation in the body and releasing blockages of energy points. Experts claim it works for backaches, headaches, stomach aches and certain muscle spasms. For some, it works instantly, while for others it may take many sessions.  The body has reflex zones which are areas connected to other parts of the body.  Every individual has reflex zones on their ears,hands and feet.  Reflexology is the practice of applying pressure to the reflex  zones on the hands,ears and feet.   The purpose of applying this pressure is that it stimulates the nerve endings which then carry out signals to other parts of the body.

Reflexology believes that applying pressure on the hands,feet or ears can have an impact on the entire body

Though  reflexology is often mistaken to be a form of massage,it is not.  Reflexology believes that applying pressure on the hands,feet or ears can have an impact on the entire body.  Reflexologists postulate that when the energy field of the body known as Qi is blocked,healing is prevented.  It also believes that pain and stress can be relieved from different parts of the body by just treating the feet.  It is because of this belief,that foot reflexology is one the most popular treatments. 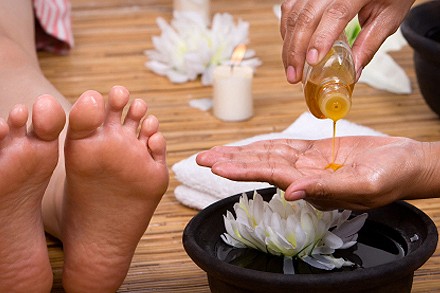 Reflexology is a big part chinese medicine and works almost in a similar fashion to acupuncture by dividing the whole body into 12 pairs of energy zones.  There are numerous benefits of foot reflexology and some of them are as follows:

This is the most commonly used technique in foot reflexology and used on the entire foot.  Before it is initiated,the entire foot is massaged for thirty seconds using both hands.  The treatment then starts by moving the big toe in circles.  the other parts of the feet are also relaxed in a similar manner.  Thumb walking helps relieve headaches,improve blood circulation and relieve pressure in the body

Previous: Getting over your genetic disadvantage
Next: 5 Fig (Anjeer) Impressive Health Benefits, Types And Selection, Storage