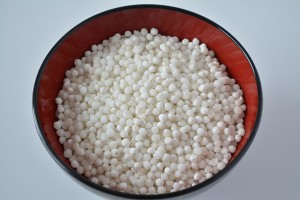 Chowari or Sago is a kind of starch extracted from the central spongy section or pith of various tropical palm stems. These are traditionally cooked and taken in various forms such as rolled balls, mixed with boiling water and made to a paste or as a pancake. Commercially, sago is produced as pearls which can be boiled with water or milk and some sugar for a sweet sago pudding. Sago pearls are similar in appearance to that of tapioca pearls and the two may be used interchangeably in some dishes. Chowari or Sago is extracted from palms, as the stem is split lengthwise and the pith is removed, crushed and kneaded to release the starch. These are then washed and stained to extract the starch from the fibrous residue. The raw starch suspension in water is then collected in a settling container. Sago or chowari edible starch which is obtained from a palm and is a staple food in parts of the tropics. The pith inside the trunk is scraped out, washed, and dried to produce a flour or processed to produce the granular sago

Sago palm The word sago is originally Javanese, and means starch containing palm pith. In quite a number of languages, however, the word has become a common name for all sources of starch. In the region in which the Indonesian-Malay language is spoken, the word sago is used to mean the starch of any palm.

The true sago palm (M. sagu) is a pinnate-leaved palm occurring in the hot humid tropics of South-East Asia and Oceania. The scientific name is derived from metra,meaning pith or parenchyma, and xylon, meaning xylem 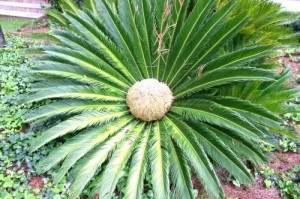 Sago starch has been highly utilized source of carbohydrates for many thousands of years. It is claimed to be one the oldest known food plants although anthropological evidence is difficult to obtain. Sago starch is an excellent source of carbohydrates. The carbohydrate content exceeds most other commonly consumed carbohydrates such as wheat,corn,sweet potato or rice The boles have always been used to obtain starch as a staple food for humans. If there are plenty of trunks, they are harvested when the fruits are being formed

To make these, slightly wet starch is pressed through a sieve. The small particles of wet starch are then rolled around and heated in a pan with a round bottom until the outside has been gelatinized. The pearls are subsequently dried, sorted and sold. These pearls are often used to prepare the ‘three palm pudding’: sago pearls, cooked in coconut milk, and topped off with sugar from the sugar palm (Arenga pinnata). In Sarawak, pearls are prepared from sago palm starch, mixed with rice bran. Previous: How to make Dal Makhani or Dal Makhni?
Next: Delicious Mango Milkshake