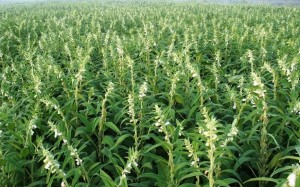 Sesame, Ellu –  (Sesamum indicum L.,)  is an ancient oil crop supplying seeds for confectionery purposes, edible oil, paste (tahini), cake and flour. It is typically a crop of small farmers in the developing countries. Sesame has important agricultural attributes: it is adapted to tropical and temperate conditions, grows well on stored soil moisture with minimal irrigation or rainfall, can produce good yields under high temperatures, and its grain has a high value.

Sesame (Sesamum indicum L.) is one of the world’s important oil crops. Its primary marketable products are the whole seeds, seed oil and meal. While sesame seeds have been grown in tropical regions throughout the world since prehistoric times, traditional myths hold that their origins go back even further.

According to Assyrian legend, when the Gods met to create the world, they drank wine made from sesame seeds. These seeds were thought to have first originated in India and were mentioned in early Hindu legends. In these legends, tales are told in which sesame seeds represent a symbol of immortality. From India, sesame seeds were introduced throughout the Middle East, Africa and Asia. Sesame seeds were one of the fi rst crops processed for oil as well as one of the earliest condiments 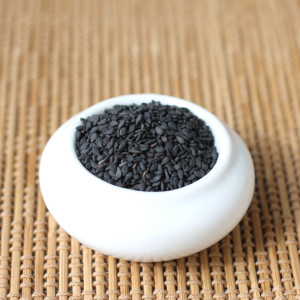 Sesame, a member of Pedaliaceae family, is an annual shrub with white bell-shaped flowers with a hint of blue, red or yellow with or without branches.Sesame is a tropical herbaceous annual that grows 1-2 m tall. Th e plant has an unpleasant odor. The leaves vary from ovate to lanceolate and are hairy on both sides. The flowers are purple to whitish, resembling foxglove, followed by 3 cm capsules/fruits containing numerous seeds. Each plant may bear 15-20 fruits, which contain 70-100 seeds. It matures in 80–180 days when the stems are cut and hung upside down for the ripe seeds to fall out to be collected on mats. Mechanical harvesting is also used, with total worldwide production of almost four billion pounds annually.

Sesame seeds add a nutty taste and a delicate, almost invisible crunch to many Asian dishes. They are also the main ingredients in ‘tahini’ (sesame seed paste) and the wonderful Middle Eastern sweet called ‘halvah’. Sesame seeds may be the oldest condiment known to man dating back to as early as 1600 BC. They are highly valued for their oil which is exceptionally resistant to rancidity. “Open sesame”, the famous phrase from the Arabian Nights, refl ects the distinguishing feature of the sesame seed pod, which bursts open when it reaches maturity.

Sesame oil is mildly laxative, emollient and demulcent. The seeds and fresh leaves are also used as a poultice. The oil has wide medical and pharmaceutical application. Sesamin has been found to protect the liver from oxidative damage. Th e oil has been used for healing wounds for thousands of years. It is naturally antibacterial for common skin pathogens such as Staphylococcus and Streptococcus as well as common skin fungi such as athlete’s foot fungus. It is anti-viral and anti-inflammatory. In recent experiments in Holland by Ayurvedic physicians, the oil has been used in the treatment of several chronic diseases including hepatitis,diabetes and migraines.