Respiratory diseases can be caused by several reasons, either by the presence of microorganisms or toxins in the environment (or in the saliva or mucus) which generally attack organisms with nutritional deficiencies, weak or immunologically predisposed to suffer any these discomforts.

Respiratory diseases –  Cough is a primary symptom of disease of the respiratory system Cough lasting more than a week or associated with fever may indicate a serious condition and should be evaluated by a physician. Cough is most often caused by infection of the respiratory tract, allergies, or direct physical irritation (for example, cigarette smoke). With this. mind, it is easy to understand the concept of encouraging the cough reflex. The removal of the cause of distress is considered the basis of any therapeutic regimen in traditional herbal medicine. Expelling the insulting pollen, the irritating soot, or the disease-causing organism makes good sense. 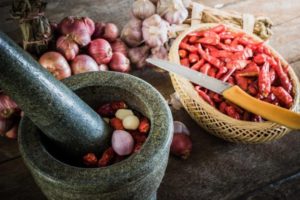 The body has an innate tendency toward self-healing, and the first goal of any therapeutic system is to encourage and maximize that urge. This explains the contrast between herbalists, whose cornerstone respiratory medicinal is the expectorant to encourage cough, and the modem pharmacy replete with cough suppressants.

In contemporary terms, cough is generally described as productive or dry. A productive cough is characterized by excessive amounts of phlegm. The drying expectorants help dry out excessive mucous secretions and stimulate their removal. Ginger, elecam pane, garlic, angelica, and ma huang are all commonly used herbs in this class.

Ginger – The spice with a healing touch

The efficacy of these thugs is believed to be enhanced by the concomitant use of a diuretic, such as parsley. This combination of diuretic and drying expectorant is believed most efficient in drying up and mobilizing excessive bronchial secretions.

When the cough is dry, the moistening expectorants are favored . Thyme is the classic herb in this class and is said to loosen up or decrease the stickiness of respiratory secretions and encourage their elimination. (Licorice has similar properties and may be considered in this class although it contains some components with drying properties as well; therefore when a significant humidifying effect is desired, thyme is the better choice.)

Asthma is characterized by excessive responsiveness of the air-ways to any irritative influence. resulting in spasm of the air passages . Asthmatic attacks can result from allergies, infection. pollutants, emotional factors, and even weather changes. In the susceptible individual, the net effect of any of these provocative factors is spasm of the bronchial tree, which is experienced by the patient as difficulty in breathing.

Thyme – An aromatic and medicinal herb

Herbs have a long history of effective use in the treatment of asthma. Thyme is said to relax airway spasm. so it is recommended for the asthmatic with a dry cough. In fact, because it is almost always desirable to produce a moistening effect on an asthmatic’s airways, thyme is an ideal herb in virtually all cases.

Licorice is found by many to be a most useful herb in asthma. It is said to Increase the production of cortisone, which relieves airway spasm, and to act generally as a moistening expectorant. In those rare cases when a drying expectorant is required in an asthmatic, garlic and ma huang may be used with good effect. .All the drugs mentioned are believed to be effective in the treatment of respiratory tract infections .

Garlic is a particularly valued herb for treating lung infections. It is excreted via exhalation and exerts a disinfecting effect on the lung. Thyme is also highly regarded and is believed to have a disinfecting or cleansing effect. Elecampane is also thought to be active against disease causing organisms. Ginger and licorice are also reportedly beneficial in the treatment of respiratory infections. However, if infection is suspected (fever, yellow or green sputum), a physician should be consulted since, In addition to one of the above, an antibiotic may be warranted.