Black Pepper (Kurumulaku) Benefits – The Humble Down To Earth Spice

If you think black pepper is not so important on your kitchen shelf, then twice. The humble down-to-earth spice has way more benefits than you’d imagine. It belongs to the Piperaceae family, and is processed in different ways to yield different kinds of peppers. For example, the cooked and dried unripe fruit is Black Pepper (Kurumulaku), the green pepper is from the dried and unripe fruit, and white pepper are the seeds from the ripened fruit of the plant.

While pepper originally belongs to South India, it’s grown in other tropical countries as well. It’s played a vital role in history, and has been considered as an important spice from time immemorial. In ancient Greece, it was also used as currency. In later years, it became pivotal in the spice trade across the world. Incidentally Vietnam is considered to be the largest grower and exporter of pepper. India, Brazil, and Indonesia follow suit. Black pepper (Kurumulaku), while used in cooking and garnishing in cuisines the world over, comes with lots of health benefits. 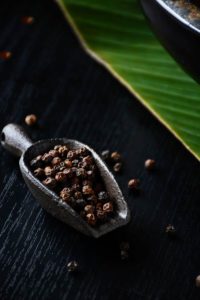 The piperine in black pepper can be credited with the prevention of cancer & becomes twice as potent when combined with turmeric. The spice also has Vitamin C, Vitamin A, flavonoids, carotenes and other anti-oxidants that help remove harmful free radicals and protect the body from cancers and diseases. The best way to eat pepper to harness maximum benefits is to eat freshly ground pepper, and not cook it along with food.

Again, the piperine in black pepper eases digestion and stimulates the stomach, which then secretes more hydrochloric acid that helps to digest proteins in food. So a bit of pepper in food will actually help you to digest it faster.

Black pepper is antibacterial in nature, and therefore helps to cure cold and cough. A teaspoon of honey with freshly crushed pepper does the trick. It also helps to alleviate chest congestion, often caused due to pollution, flu, or a viral infection. You can add it to hot water and eucalyptus oil and take steam. And given that black pepper is rich in Vitamin C, it also works as a good antibiotic.

You might not want to believe this, but black pepper is brilliant when it comes to extracting nutrients from food. And it’s outermost layer contains phytonutrients, which helps to break down fat cells, and also increases metabolism. If you eat fresh pepper, and begin to perspire, that’s the pepper helping your body to get rid of excess water and toxins. But you need to control consumption – a pinch with your food (one meal) is enough.

Did you know that crushed pepper is one of the best exfoliators nature has provided us? Don’t use it directly though; add a bit of honey, curd, or fresh cream to it. It also enables blood circulation, and provides the skin with more oxygen. Adding it to your food also takes care of unwarranted skin wrinkles. Black pepper is known to help in the cure of Vitiligo, a condition where the skin loses pigmentation, and creates white patches.

It’s said that the piperine in black pepper helps to deal with depression. It stimulates the brain, and helps it to function properly by making it more active. 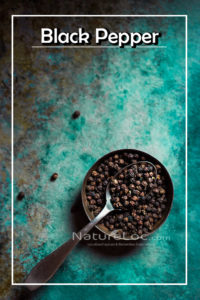 To take maximum advantage of the benefits of black pepper, it’s important that you store in the best way possible. It’s recommended that you buy whole peppercorn and crush it at home. This not only makes sure that the spice retains its flavour, but also that it lasts longer. Store it in an airtight glass container, and always in a cool, dry, and dark place.

The use of Black Pepper (Kurumulaku) in food is limitless. Pongal, a breakfast food in South India, contains whole black peppercorns, which adds a delicious fieriness to the dish. Rasam with whole peppers is not only tasty, but is also cure cold and blocked nasal passages. Something as simple as fried rice can be spiked with pepper for additional flavour. Freshly crushed pepper can be added in almost anything — from salads, sunny side-ups, and soups, to pastas, and even buttermilk. You can use it to spice up sauces for steaks or curries, or use it to coat meats such as duck or chicken before grilling it. But most experts will recommend that you cook pepper as less as possible; it’s the freshly ground ones that are most beneficial. Therefore, invest in a good pepper mill, and keep it on the table — you never know when you might need it.