Rasgulla A sweet worth fighting for 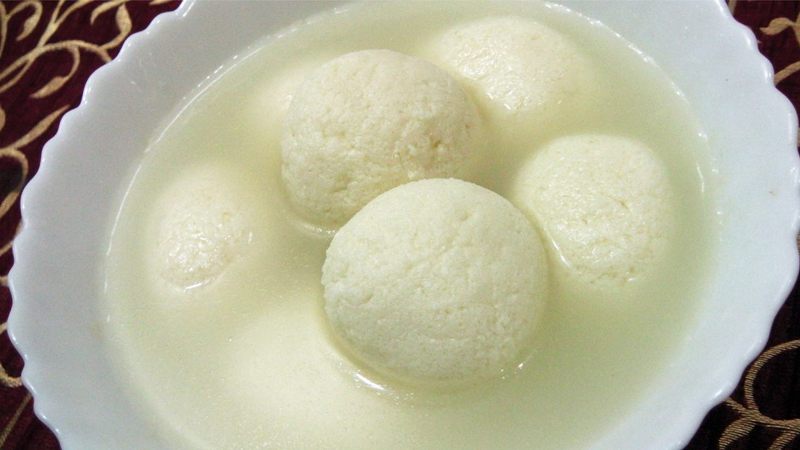 The sweet rasgullas is the subject of bitter battle,with 2 states West Bengal and Odisha – fighting for the right over its discovery.  Even as the debate rages on,for those who love the taste of this syrupy sweet,it hardly makes any difference

The folklore behind rasgullas

The story of rasgulla goes back to it being the traditional offering to the Hindu Goddess Lakshmi, consort to Lord Jagannath at the Puri Temple during the last day of the eleven-day long   Rath Yatra Festival,which is then distributed as prasad to devotees.  The claim by food historians that rasgulla is a 700 year old tradition in Odisha and is originally different in appearance,finds its base in folklore.  According to it,rasgullas are said to resemble Lord Jagannath’s round eyes and so,originally,they were slightly oblong and light brown in colour referred to as kheer mohanas

It is said that from Odisha, Kheer mhanas reached the shores of Kolkata a dn since they were extremely perishable item,a sweet shop owner in the city reinvented them to the now familiar round white chenna balls.  However, there is also counter claim with some saying that since the procedure of making chenna was introduced by the Portuguese who came to India much later, it is not possible that rasgullas were part of ancient Odisha tradition

Variations of the Rasgulla

From Kheer mahana to rasgulla,the sweet travelled to other states of India,transforming into different variations.  The plain rasgulla is a soft and spongy sweet dumpling made of cottage cheese floating in sugar syrup.  While some use maida,others add sooji or semolina to blind the chenna mixture

Rajbhog  – Food fit a for a king – Dry Fruits-Almonds,pistachios and saffron

A larger version of the rasgulla,stuffed with dry fruits like almonds,pistachios and saffron,when literally translated,it means food fit a for a king

The chenna poda uses chenna and sooji with little elaichi and sugar,and is wrapped in the leaves of the Sal tree to be baked till the chenna poda develops a crust.  When ready,it looks like a big dish of caramel custard, which can be easily sliced into pieces

While the ingredients for chenna gaja are the same as rasgulla,this sweet has a different taste altogether.  It is a dry dough mixture of chenna and sooji,which is cut and shaped in rectangle blocks (gajas).  These are then deep fried and coated with sugar syrup just before serving.

Kamala bhog is an orange coloured rasgulla which is slightly bigger in size  and it is made using orange extracts,essence or foo colour

Nolen gur or fresh date palm jaggery available in the winter season in Bengal is used to make this rasgulla.  It is light brown in colour with the jaggery giving the syrup a brownish tinge.

Palm Jaggery – An Excellent Nutritional Sweetener
Palm jaggery is darker and richer in  colour. It can be used as an excellent substitute for white sugar. When compared to sugar, palm jaggary is an excellent nutritional sweetener. Buy On line Palm Jaggery

Pistachios – One of the best fiber nuts -Skinny Nut.Vitamin B6 – Fostering immunity and healthy blood

Cardamom (Elakkaya ) – Elaichi  – Cardamom – ‘Queen of spices’.  Cardamom is a spice, originated in India, Nepal, and Bhutan. It is also called by the name Elaichi. It is one of the most common spices seen in an Indian household.