The plant has a long and ancient history in many countries as a culinary and medicinal herb.The earliest known record of dill as a medicinal herb was found in Egypt 5,000 years ago, when the plant was referred to as a “soothing medicine. During the seventeenth century, dill became a popular herb in England and it could be found in many “hortus,” or kitchen gardens 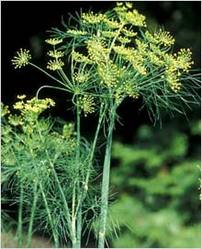 Dill – as a culinary and medicinal herb

The name “dill” means to “calm or soothe,” and most likely originates from the plant’s known ability to calm troubled stomachs and colicky infants. The Latin name graveolens comes from a combination of two words; gravis, meaning “heavy or weighty,” and oleo, which means “producing a smell or odor.”When combined into graveolens the meaning of these two words becomes “emitting a heavy odor or strong smelling.” Thus, the name Anethum graveolens means a tall plant with a vigorous growth habit that has a strong smell. 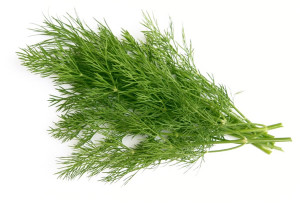 Dill is most commonly known for giving dill pickles their characteristic flavor. However, dill has a myriad of culinary uses that go beyond pickles.The general home  cook most often uses dill in two forms:
Dill seed and Dill weed.

Cooks often prefer to use dill weed because it has a stronger flavor than that of dill seed.

Dill seeds bitter in flavor with subtle undertones of caraway or anise.

Cooks use them in whole or powdered form. The seeds are often used as a condiment, but they can also be combined with onions, cabbage,potatoes, cumin, chili powder, and paprika . Additionally, they can be added to casseroles, lamb, fish, vegetable dishes, and sauces.Dill seeds take a long time to release their flavor, so it is best to add them early on in the cooking process. 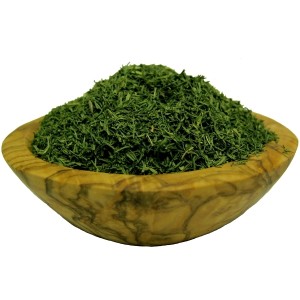 Dill vinegar can be made by adding the seeds to vinegar and allowing the mixture to steep for several days.Dill weed
also has a taste similar to that of anise and caraway, but the flavor is much stronger and more pronounced.Chopped or whole dill weed can be added to soups, stews, casseroles,meat dishes, pasta, and eggs. It can also enhance all types of sauces