Pepper –  sharp, hot and biting taste -King of all spices 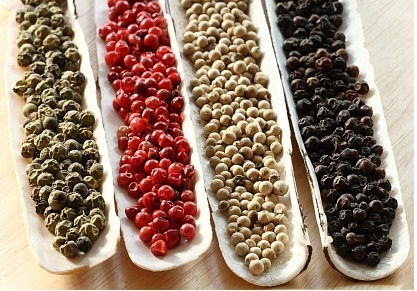 The history of the Pepper family – Members of the botanical family Piperaceae were among the first cultivated plants. Black pepper (Piper nignun) and long pepper (Piper longum) are the best-known species in this family and are probably among the most recognized spices in the world. Black pepper alone accounts for about 35% of the world’s total spice trade. In addition, black pepper and long pepper have been used medicinally for centuries In recent years, extensive research data on the phytochemistry and unique pharmacological actions of these plants have also become available. Pepper is obtained from the seeds or berries of the plant Piper nigrum

White pepper from the same berries with the husk dried an removed.White pepper – It is generally prepared by setting (with frequently changing of water) fully ripened red berries for 7-8 days followed by removal of outer skin, washing and drying to a moisture level of 12%. White pepper is also prepared by fermentation using matured green pepper and black pepper.

Pepper is ground and used in curries to add piquancy and flavour to dishes.  It is also used as a table condiment 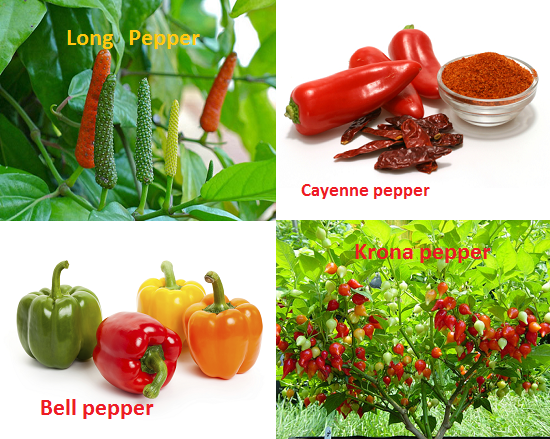 As a seasoning, pepper is next only to salt.  Both the green and dry pepper are high in fat, protein,calcium,iron,phosphorous and carotene,  Red pepper (red chillies) is used extensively in desert areas to make up for deficiency of vitamin A.  Bell pepper is high in vitamin C as well.  These are irritants to the stomach and should  therefore, be used in moderation

Pepper species have been used in traditional medicine for intermittent fevers and to promote the secretion of bile. They are also recommended for neurological, broncho-pulmonary and gastrointestinal disorders (including dyspepsia, flatulence,constipation and hemorrhoids)

Long pepper, and to a lesser extent trikattu, have been used in the treatment of asthma and chronic bronchitis in Ayurveda and Unani medicine

Pepper’s hot taste hot feel and its thermionic effect
almost everyone recognizes that the black pepper sprinkled on their food makes it taste spice or hot. Black and long peppers stimulate the skin as well as the tongue, thus they are also useful for topical application. They have broad anti- microbial, anti- parasitic and insecticidal properties. It traditionally used as local anesthetics, but the mechanism of this analgesic (pain relieving) action has only been recently described.  The biological mechanism of piperine is strongly linked to its hot taste, further validating its representation as a nutraceutical or “functional food”.